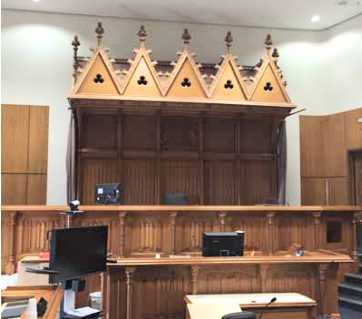 Sadly the last sitting in the historic Durham Street High Court has taken place and the Court has relocated to the new Justice Precinct in the Chistchurch CBD. Even more sadly the Kauri Dais Rejigit wrote about 05 May, 2016 has not been installed in the new High Court.

Rejigit agrees with the comments of Nigel Hampton QC at the time of the final High Court sitting in Durham Street; "Why we are saying farewell to it now is beyond belief ... It is an insult to history and heritage to see it go."

Christchurch’s No.1 High Court in Durham Street contains a magnificent Victorian era Kauri Dais, Canopy and Judge’s Bench which dates to the 1860’s.

Unfortunately it is another example of Christchurch's historical architectural items which have become increasingly rare as a consequence of earthquake damage and this undamaged and irreplaceable installation should be preserved at any cost and regardless of modern architectural inconvenience.

Disturbingly, the Ministry of Justice deputy secretary higher courts, Robert Pigou, is reported as having said there were no plans to incorporate the Dais into the new Christchurch Justice and Emergency Services Precinct which comprises three buildings (the Justice Building, the Emergency Services Building and a car park) located in a Christchurch central city block bordered by Colombo, Tuam, Durham and Lichfield Streets in Christchurch’s central business district and which is to cost some three hundred million dollars.

It is an outrage that  bureaucrats and others see fit to ignore the historical significance of heritage pieces such as this and Christchurch citizens must be vigilant and should make known their displeasure  before they become lost to the City.

Nigel Hampton, QC has instigated an online petition seeking to ensure the historic Dais will be preserved and incorporated in the new High Court.

Rejigit supports Nigel Hampton and encourages as many as possible to go to the website and sign the petition. http://www.christchurchcourtdaispetition.website/