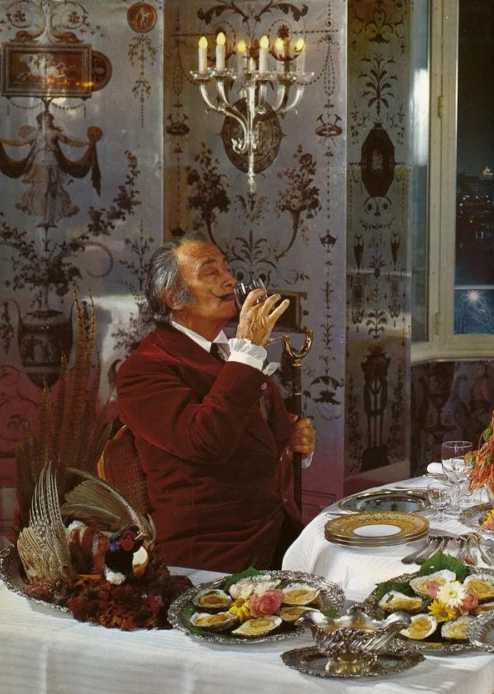 A re-run of the hardcover edition of Salvador Dali's cookbook Les Diners de Gala has become available on Amazon at US$35.99.

When the surrealist master artist, Salvador Dalí was six years old he said, I want to be a cook. It wasn’t until he was seventy three that he got around to producing a cookbook, “Les Diners de Gala”. A lavishly illustrated cookbook originally published by the French publisher Felicie in 1973 and featuring some of Dalí’s erotic etchings and paintings which produced a visual flair, a winking sense of humour, a disregard for accepted norms and a heightened feeling for the absurd. The book is described as including a mind-bending mix of the real and the Freudian cacophony of the artist’s mind. 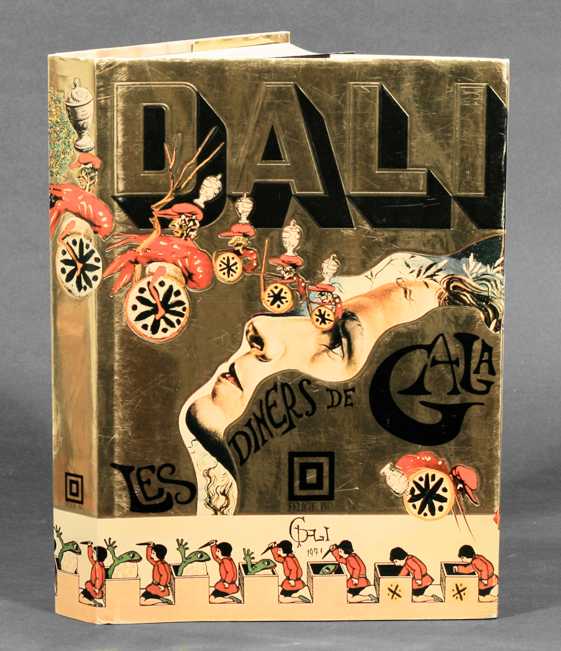 The book comprises one hundred and thirty six recipes in twelve chapters and each chapter covers a specific cooking category and/or philosophy.

Individual chapters are devoted to aphrodisiacs, exotic dishes, snails and frogs and the appropriate uses for “atteletes” (meat jewellery) amongst other things. Throughout the book Dalí invents phrases such as “gastro esthetics,” a philosophy he explains while denouncing spinach: “In fact, I only like to eat what has a clear intelligible form. If I hate that detestable degrading vegetable called spinach, it is because it is shapeless, like Liberty."

Recipes include such things as “Veal cutlets stuffed with snails,” “Frog Pasties,” and “Avocado Toast.” The avocado toast consists of mashed avocados with lamb brains and almonds spread on toast.

The book's chapters are entitled thus; 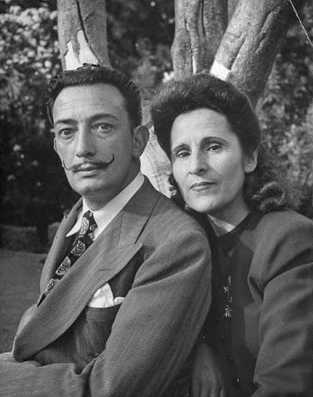 Prefacing the book's recipes is Dalí’s unambiguous and cautionary disclaimer, penned at a time many dieting fads were becoming popular.

“We would like to state clearly that, beginning with the very first recipes,Les Diners de Gala, with its precepts and its illustrations, is uniquely devoted to the pleasures of Taste. Don’t look for dietetic formulas here. We intend to ignore those charts and tables in which chemistry takes the place of gastronomy. If you are a disciple of one of those calorie-counters who turn the joys of eating into a form of punishment, close this book at once; it is too lively, too aggressive, and far too impertinent for you”. 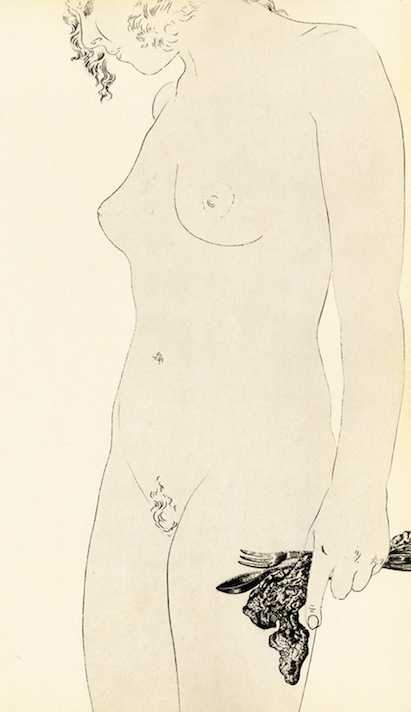 It is thought only 400 copies of the book were printed. It is listed on Amazon at $330 and prices can range up to princely sums in the region of $25,000 depending on condition and whether it includes the dust jacket and particularly if it is signed by the author / artist.

CONGER OF THE RISING SUN

First of all, let us prepare the slices of conger eel by removing the skin and the central bone, one by one. Then place the pieces on a strip of bacon (cut to match the size of the piece of eel) and each of these on to a much larger piece of the caul. Add salt and pepper, then, on each piece of the eel, put a leaf of lettuce, on top of which you add 2 oz of soya beans (raw soya is the best, but canned soya will do). Sprinkle then with curry powder, salt, pepper. Pour a teaspoon of heavy cream over it, cover with a second leaf of lettuce and tuck in the caul on the four sides to wrap up all the ingredients of this recipe.

Using a very large skillet cook the fish slices on top of the range, simmering slowly, in a tablespoon of butter for 40 minutes. Be sure to go about it gently. Remove the slices and keep them warm; in the skillet, add the flour. Do not let it get brown; combine with the heavy cream and curry, taste for seasoning. Let it all boil for a little while and pour over the slices of the conger eel.

In a big pot you pour the water, salt, a dash of Cayenne pepper, paprika, saffron, chopped veal, and rice.

As soon as the broth begins to boil, crush your crayfish in a mortar, one after the other. Be sure to really crush them to a pulp and add them progressively to the broth. Keep it boiling for 45 minutes.

The broth is then strained “Chinese style” i.e.; in a sieve that you can push with a wooden spoon so as to get all the juice out. Put back on the fire, stir and add the egg yolks without letting it boil. Your consommé is ready. May I suggest that you serve it with thin garlic toasts. 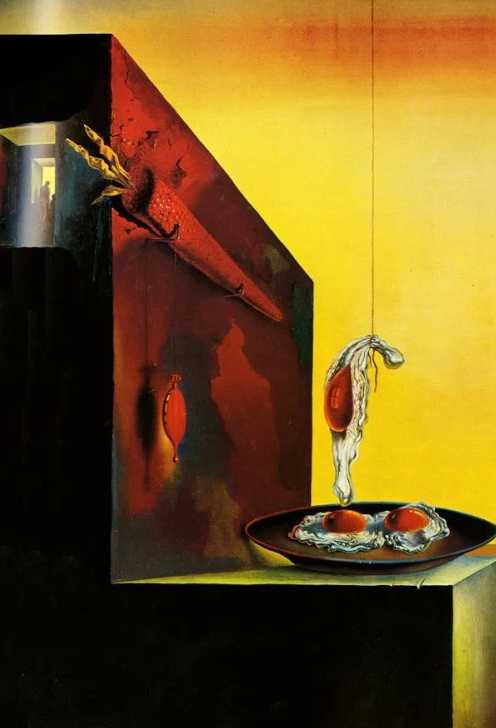 You certainly know these thousand year old eggs, one of the crowns of Chinese cuisine. We will not presume here to reach their ultimate perfection, but we will simply try to help you follow an amusing recipe which has the advantage of being prepared ahead of time.

First, boil the eggs for ten minutes in salted boiling water. Then take them out, put them under cold running water which will make it easier to shell them. In the same water in which the eggs had boiled, add the cloves, sugar, vinegar, a lot of Tabasco sauce, the lemons (cut in eighths) and thyme. Boil for 15 minutes. Shut off the flame, dip in the tea-bag and let them steep for 10 minutes.

In a jar, put the diced onions and garlic. Add the shelled eggs, and pour the broth so that the eggs are completely immersed. Close the jar and keep it on the lower shelf of your refrigerator.

Be patient for three weeks before opening the jar and serving. These eggs go well with cold meats and fish. 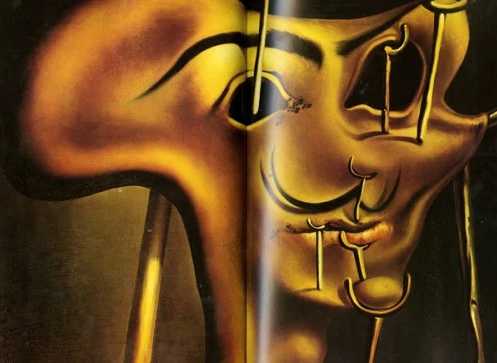 First buy the sausage then hand it over to your butcher so that he can cut a piece of top round that will wrap around it. Fry the sausage in the shortening for about 10 minutes. Brush the one side of the top round with mustard; put the anchovies on top, then the sausage, roll, tie up with string.

In a Dutch oven, brown the meat in shortening. When the meat turns golden, replace it with the onions, and when they are golden, add the tomatoes as well as the garlic and red peppers.

Cover after a while. The tomatoes will produce a juice and start boiling; put the meat back and salt carefully (because of the anchovies).

Pare the celery stalks, cut off the green parts and tips of leaves, peel the root.

Cut it in half and wash thoroughly, especially between the leaves.

Bring salted water to a boil and cook the celery for 15 minutes. Cool under running water. After half an hour, place the celery around the top round.

It will cook in the meat juice for one hour. 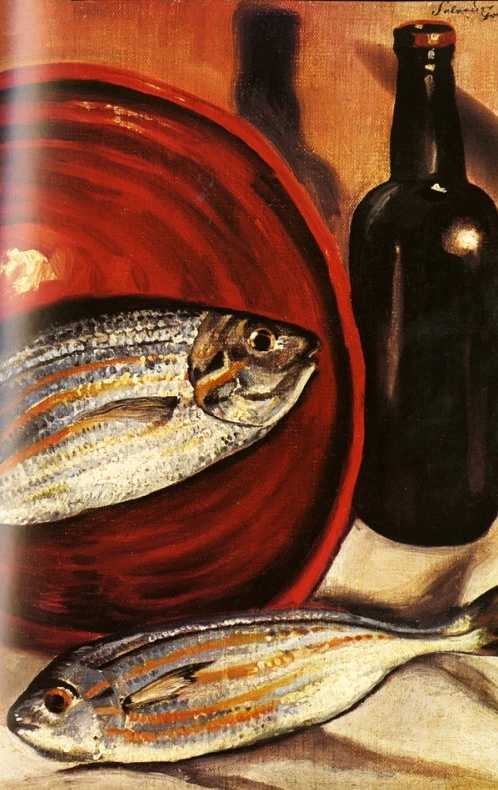 This is quite appropriate when circumstances such as exhaustion, overwork or simply excess of sobriety are calling for a pick-me-up.

Here is a well-tested recipe to fit the bill.

Let us stress another advantage of this particular pep-up concoction is that one doesn’t have to make the sour face that usually accompanies the absorption of a remedy.

At the bottom of a glass, combine pepper and ginger. Pour the bitters on top, then brandy and “Vielle Cure.” Refrigerate or even put in the freezer.

Thirty minutes later, remove from the freezer and stir the juice of the orange into the chilled glass.

Drink… and wait for the effect. It is rather speedy.

Rejigit will try the Casanova Cocktail. 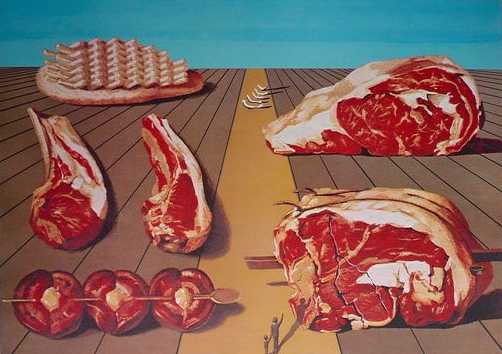 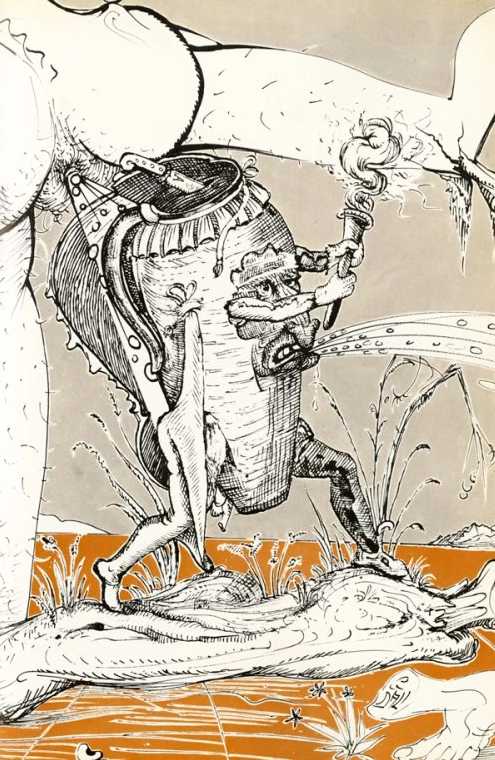 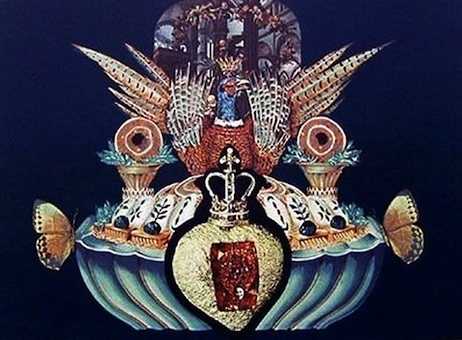