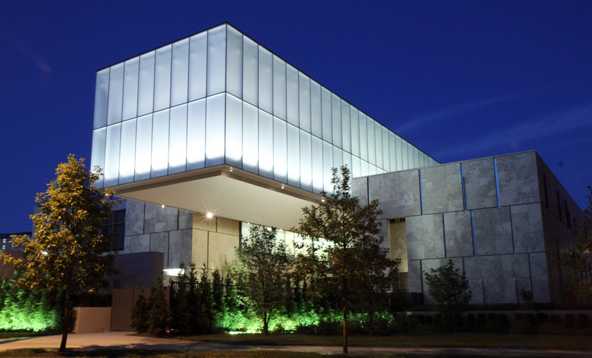 This is a story in three parts. A collector, a new gallery and a collection.

...Dr Albert Coombs Barnes (January 2, 1872 – July 24, 1951) was an American physician, chemist, businessman, art collector, writer, and educator, and the founder of The Barnes Foundation in Pennsylvania. 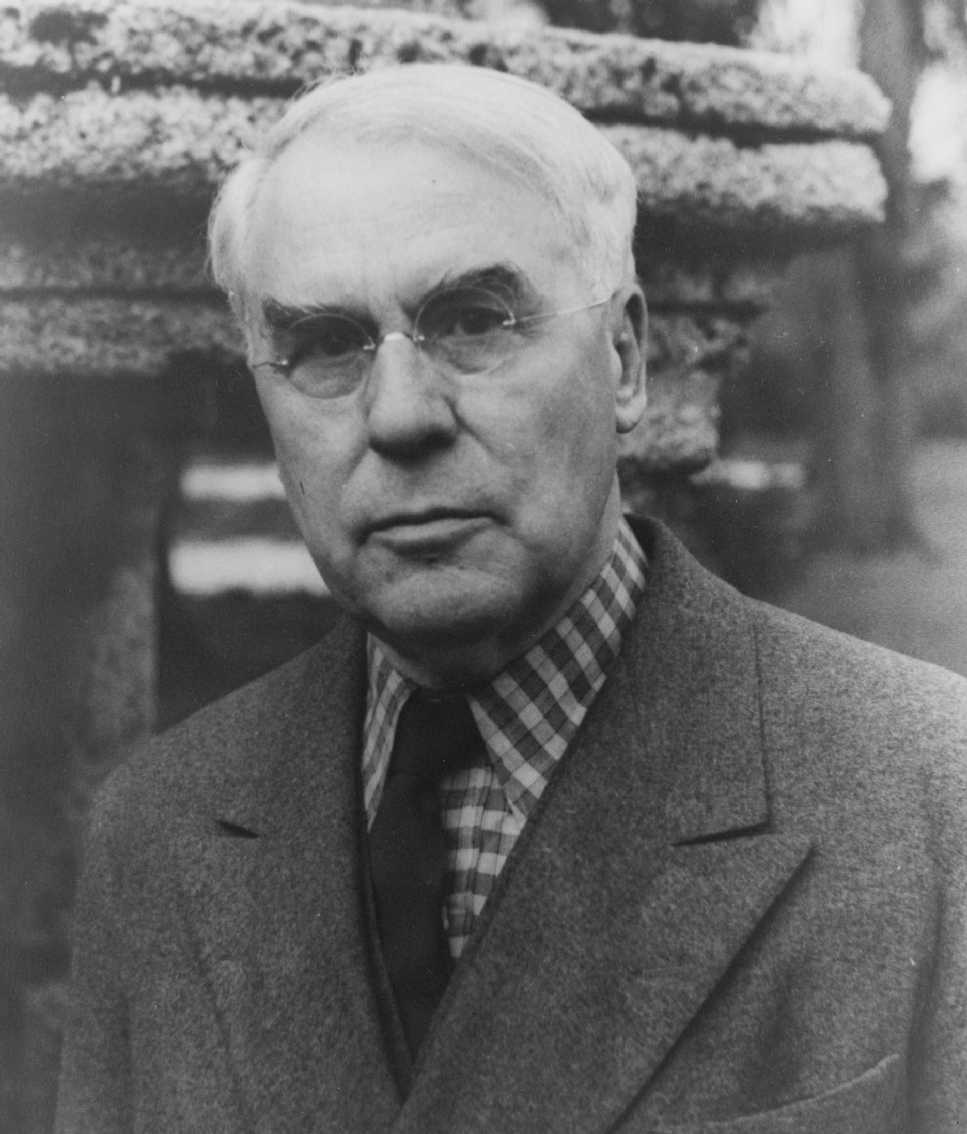 In 1899, together with a German chemist, Hermann Hille, Dr Barnes developed a mild silver nitrate antiseptic solution. They formed a company and marketed their invention as Argyrol, a treatment for gonorrhoea and a preventative for gonorrhoeal blindness in newborn infants. Within five years of starting the business in 1902, the company generated $250,000 in profit (US$7,100,000 in current value adjusted in terms of annual U.S. CPI increases). Dr Barnes bought out Hermann Hille, and in 1907, he had become a millionaire at the age of 35. In July 1929, he sold his business for a reported sum of $6 million (US$83 million today).

The move was well timed, as he sold before the 1929 stock market crash and the discovery of antibiotics, which rendered Argyrol redundant.

Dr Barnes set about establishing what is now described as the world’s pre-eminent private collection of impressionist, post impressionist and early modern art. He was described by some as eccentric and sometimes difficult to deal with.

He would not take advice from anyone who he considered to be too sophisticated and he did not want the socially elite to intrude on his space because his taste in art had previously been criticised. He made it abundantly clear that he created the Foundation, not for the benefit of art historians but for students. Dr Barnes was known to send letters to those he did not like, signed by his dog Fidèle-de-Port-Manech.

The original Barnes Foundation was an independent educational institution and was established in 1922 in a gallery next door to Dr Barne’s residence in Philadelphia. At that time, viewing of his collection was by prior arrangement only.

...A very impressive new home for The Barnes Foundation was opened May 19, 2012 downtown Philadelphia on Benjamin Franklin Parkway between the beaux arts public library and the Rodin Museum. Fortunately the new gallery is open to the public.

The architects for the 93,000 sq. ft building are Tod Williams + Billie Tsien Architects (TWBTA) based in Philadelphia.

Second floor galleries have a clerestory which draws top-light into all spaces and which is diffused through a carefully designed light louver system.

A reduction of 40% in usual Energy requirements was achieved via photovoltaic panels which are equivalent to twelve thousand square feet in terms of the building's Light Canopy. Landscape irrigation is provided by a 40,000-gallon rainwater collector and cistern.

The stone which wraps the exterior is a fossilized Israeli Limestone called Ramon Grey and was quarried in the Negev Desert and cut and finished in the West Bank by an Israeli/Palestinian consortium.

Interior finishes are Reminiscent of rationalist interiors in Italy, for example the villa necchi campiglio. 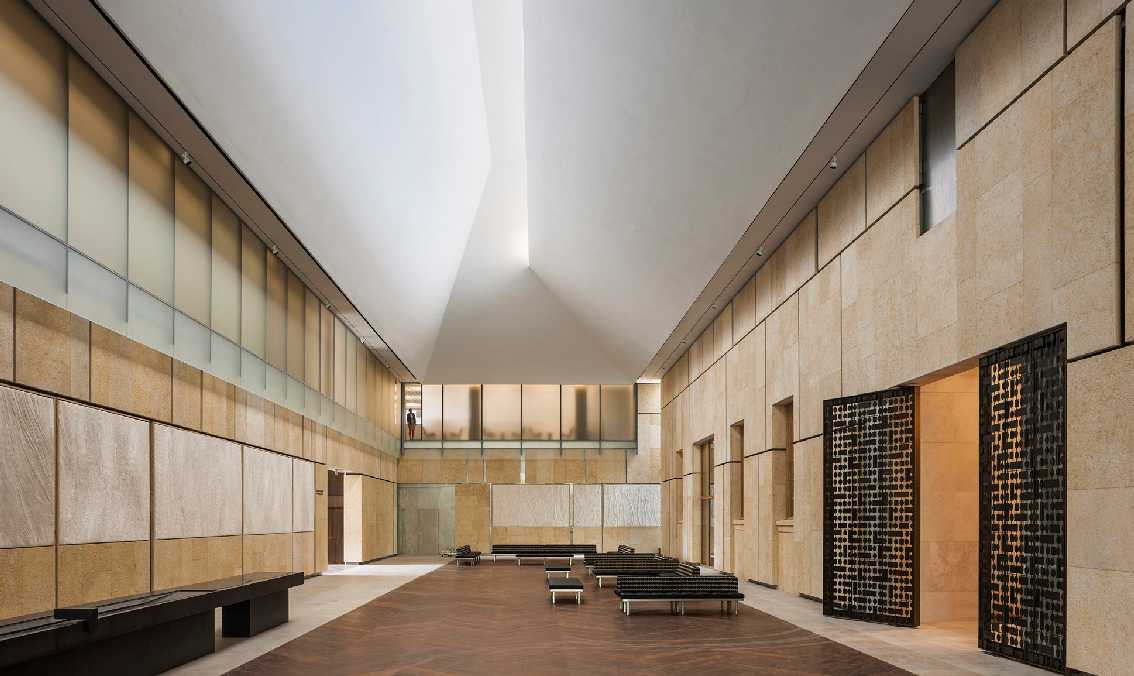 Claudy Jonstra the Dutch artist produced fifteen individual large felt wrapped art panels which adorn the walls of the ground-floor lightcourt. The ‘white on white’ silk on wool fabrics are serene and tactile and are of a Mother of Pearl nature. The panels were inspired by paintings by the Dutch painter, Jan Schoonhoven. 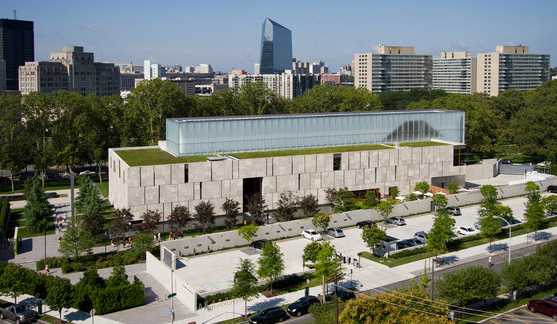 ...In 1912, during a visit to Paris, Dr Barnes was invited to the home of Gertrude and Leo Stein, where he met artists such as Henri Matisse and Pablo Picasso. In the 1920's, the art dealer Paul Guillaume introduced him to the work of Amedeo Modigliani, Giorgio de Chirico, and Chaim Soutine among others. With money, an excellent eye, and the poor economic conditions during the Great Depression, Barnes was able to acquire a broad range important art at bargain prices. "Particularly during the Depression," Barnes said, "my speciality is robbing the suckers who had invested all their money in flimsy securities and then had to sell their priceless paintings to keep a roof over their heads." 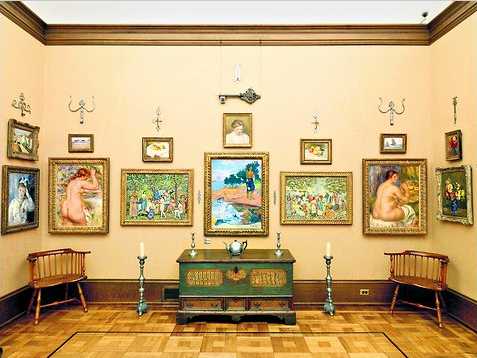 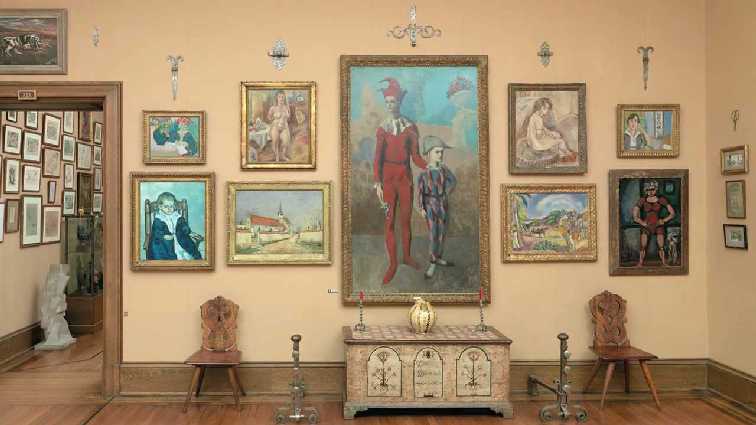 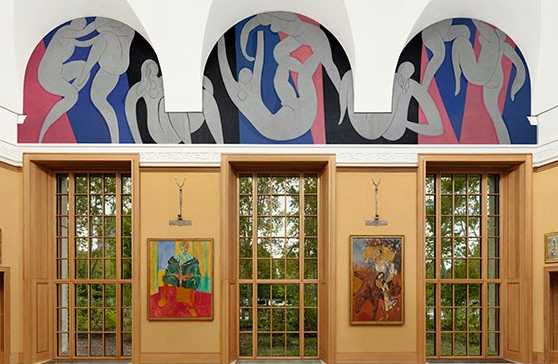